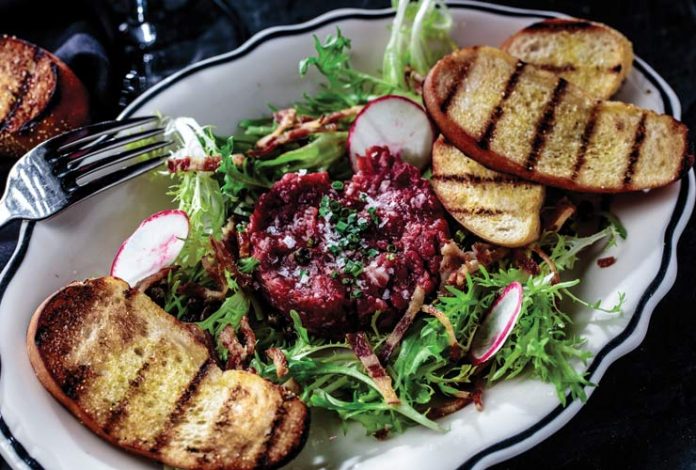 Ask a South Florida transplant from Maryland if they want to order a crab cake off the menu at a local restaurant, and their likely response will be “no.” That’s because nothing quite compares to what they grew up eating. But when Baltimore-based brother duo Alex Smith (founder and president of Atlas Restaurant Group) and Eric Smith (co-owner) opened Loch Bar in Boca, biases were set aside.

Known for its raw bar and elixirs, Loch Bar made its South Florida debut in fall 2018 following in the footsteps of its sister restaurant Ouzo Bay, located across the way in Mizner Park. The original is based in Baltimore.

The tavern’s dark leather booths, marble tables and classic bar setup is a picture-perfect spot for indulging in seafood staples with a Maryland flare. Even better is the impressive whiskey list, offering more than 500 choices, which the restaurant claims is the largest assortment to date in South Florida.

Raw Bar and Then Some

No matter how you go about it, start with seafood. This can be in the form of Maryland Crab Soup or Chesapeake Crab Dip. Or, take our advice and order a shellfish tower to share with the chef’s selections of freshly shucked East and West Coast oysters, clams, mussels, shrimp cocktail, Alaskan king crab, Maine lobster and crudos.

“We source locally as much as possible to celebrate the abundant seafood available to us in South Florida, featuring stone crabs from a fisherman in Key West, local mahi mahi, local swordfish and yellowtail snapper as well,” Eric Smith says.

The Lobster Roll is piled high with juicy pieces of Maine lobster meat nestled into a toasted split-top bun served with a side of Kerrygold Irish butter. There’s also Funky Buddha Fish n Chips made with mahi mahi dipped in beer batter, served alongside boardwalk fries. As for those Maryland Crab Cakes, two arrive on a plate with mixed baby greens and a side of Old Bay remoulade.

And while Loch Bar’s seafood offerings are ample, Fried Chicken, a favorite, finds a special place on the menu. Order it with a side of Honey Sriracha Brussels Sprouts.

Stay for live music (offered daily) to sample the signature 17-layer Smith Island Cake with chocolate ganache and wash it all down with a pour of whiskey. Elevated options include Laphroaig 32-year-old Single Malt Scotch Whisky and Pappy Van Winkle Family Reserve, or order a Lemon Crush for a spiked classic.

Cool Off with These Popsicle Picks